Connecting people, space-time, and culture, one by one 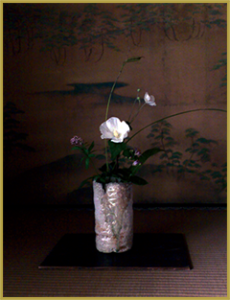 Something we kept from time immemorial, reformed through time but remained within us and have been handed down from one person to another for spiritually richer lives. We call these traditional culture.
As we live in so-called information and international society, the world seems smaller and closer. However, while we pursue for convenience, aren’t we losing something very precious?

For PEOPLE to see each other face to face and commune from the heart,
To add a life to what our predecessors have created over the years and to bring them down no matter the SPACE-TIME,
And the CULTURE that grew with the land.

We desire to be the bridge across each other.
Hashigakari is the name for the long hallway on the stage of Noh connecting the stage wing and the main stage.
We named the group as we wish to connect people and countries, to bring down the cultures from the past to the future, and to connect the numbers of traditional Japanese cultures no matter the genre or the style.

Natural features of four seasons in Japan are beautifully inlayed in traditional cultures. As time goes by and season changes, Japanese people appreciate and cherish these features. This fact deserves praises and respect from people abroad.
In overseas countries, there are quite a lot of people not only interested in Japanese cultures but also have knowledge of them, sometimes even more than people in Japan, and this fact amazes us.

As “Bridging The Traditions,” we wish to offer opportunities for both foreigners and the Japanese to know the Japanese traditional cultures. We give our best effort to pass down the losing culture to the next generations.

We fully appreciate your understanding and support. 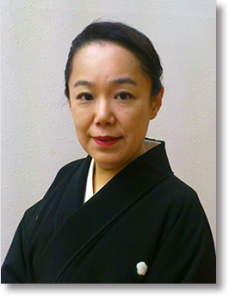 <Noh>
Shokubun*: One of the classes that exists as Noh performer. Shokubun is a professional class.
Shite**: Performer and role of the main character of the show. Performers and roles of supporting characters are called Waki.
Hosho-ryu***: One of the traditional groups and schools that performs Noh and trains actors. There are some other groups such as Kanze and Komparu.

<Tea Ceremony>
Urasenke*: One of the traditional groups and schools that performs and teach tea ceremony.
Gyoutei**: The name for assistants for the Iemoto (head of the group) who also is in the level of trainer/mentor.

Born in a family running Japanese tea ceremony, and learnt the way of it from the age of three.
While in New York for university, she recognized the profundity of the whole Japanese culture, and widens her interest in Nogaku and tea ceremony even more. After returning back to Japan, she succeeded the family business of tea ceremony but she was always fascinated by Noh. In 1999 she went back to study at Tokyo University of the Arts, majoring Nogaku in the Department of Traditional Japanese Music, Faculty of Music.

She was then accepted by Hosho family group of Noh, as a probationer then became a professional performer, and joined the Nogaku Performer’s Association. She completed her 9 years of research at the University, and earned the doctor’s degree of music. She is on the stage performing Noh while continues her research as Noh researcher. She is the first professional Noh performer with a doctor’s degree.

As in tea ceremony, when an exhibition of the national treasure Kudara Kannon statue was held in Paris at the Louvre Museum in 1990, she was selected as a member of the delegation for the Eye-opening ceremony and Kencha ceremony (tea offering ceremony) along with then Urasenke 15th iemoto (head) Hounsai Daihoushou and his wife, and Yoshinobu Takada, the superintendent priest of Horyuji. Then French President Mr. and Mrs. Jacques Chirac was present at the ceremony. Also, she demonstrates tea ceremony to the international ambassadors residing in various countries such as Egypt. She makes tremendous contribution to spread the beauty of tea ceremony all around the world.

She founded “Bridging The Traditions” and this group will offer various programs such as performances, Nogaku experience classes, demonstrations and lessons for foreign visitors. As its name, it will work as a bridge of the culture to the future, and she works on new programs constantly.
While being born and raised in Japanese traditional cultures, her unique and original perspectives are gained through her life abroad. Because of her international sensibility, she continues to create out of box. Her beauty of movements and expressions on the Noh performance that are refined to the limit are highly significant than others in the beauty of tea ceremony as well. 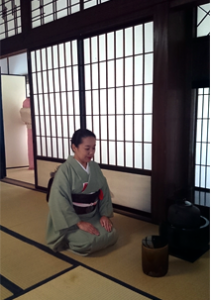 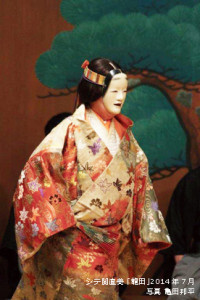